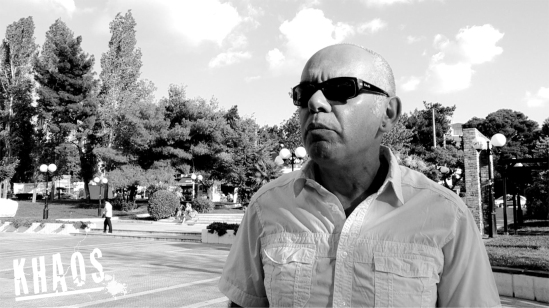 This Greek historian and anthropologist guide us into this road movie thought Greece. On his blog, Greek Crisis Now he uses ethnography to analyse the Greek crisis. He defines himself as an  »economical war blogger. »

Graduated from the University Paris X Nanterre, Panagiotis Grigoriou studied and worked in France until 2008. He has a critical look at Greece and studies this country on an ethnological point of view from the inside. In 2010, Grigoriou stopped receiving public funds for culture and research because the crisis and the austerity policies started in Greece.

«Of course Greece is no longer in the news the day after the elections like it was in May or in June.

Nonetheless, we can consider that the ‘revolution window’ (opened in May 2011 with the Indignants Movement and closed in June 2012) is over and that the next historical period is still on hold. The waiting is quite difficult especially for the people of the Hellenic Republic.

The movie Khaos shows a face of the crisis from the ‘revolution window’ that leads to the third period that started in June 2012 (the first period was going from May 2010 to the signature of the Memorandum in May 2011).»

Anthropologist and historian, I first considered the notion of « insularity » (a survey of a fishing community in the Aegean). Using written sources from the front of the 1916-1922 period, (letters sent from the front to soldiers’ godmothers; personal diaries), as a historian, I proposed a « cultural history of war » in the Balkans. I finally brought this same look as a historian and ethnographer on French news, being a correspondent in France of the Greek magazine Nemesis (1999-2008).